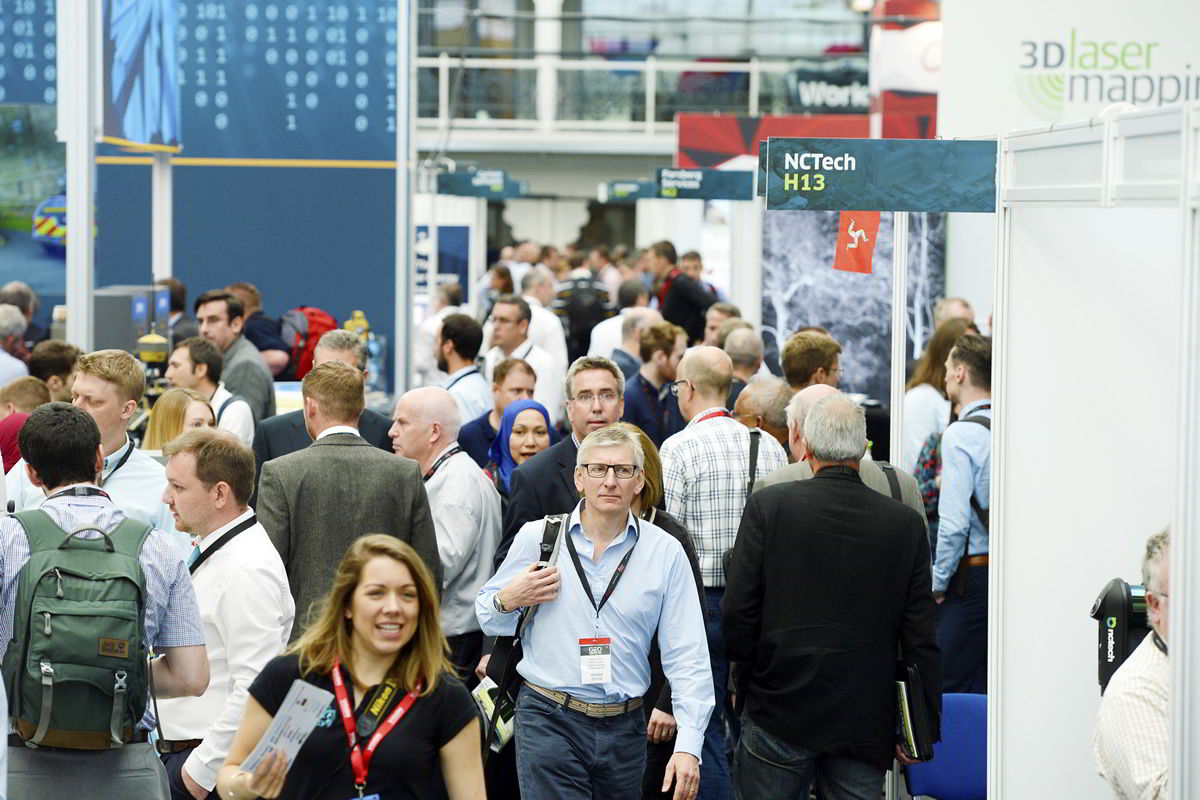 The fifth instalment of GEO Business that took place in London last week, will surely be remembered as the busiest show to date, in fact, the exhibition hall was so packed, at times it was hard to make yourself heard!  Anyone who is anyone in the geospatial industry was there including the Government’s appointed head of the newly established Geospatial Commission whose keynote address was extremely well received.

The two day show provided a veritable feast of strategy combined with technology to an incredible 2602 attendees from 53 countries who flocked into the show to discover for themselves the vast range of technologies and services now available to them in this burgeoning sector. This rise in numbers equates to an amazing 9% increase in visitors since the last show and a 61% increase since the show was launched in 2014.

The GEO Business organisers certainly pulled out all the stops this year. From a brand new website; to a brand new app to help guide visitors around the show and schedule their time effectively when choosing from close to 200 presentations to attend; and finally a newly launched and cutting edge seminar programme, designed to demonstrate the remarkable impact geospatial technologies and solutions are having on our global environment.

A thriving exhibition at the heart of the show

The exhibition was bustling from the minute the doors opened until the close of show announcement on the second day proving that GEO Business is THE place to do business.  The likes of Survey Solutions Scotland, Ordnance Survey, Topcon, GAP Group, Bentley Systems, Trimble, Viametris, Phoenix, CHC Navigation and Leica Geosystems (to name but a few) were amongst the 200 exhibitor strong exhibition.  Once again exhibitors took advantage of hosting commercial workshop sessions, many of which experienced standing room only in each of the allotted lecture theatres.

Diverse and intensive seminars at the cutting edge of industry

The core mission of GEO Business is to connect communities of specialists – surveyors, engineers, GIS analysts (and many more) with wider business and industry.  Following the introduction of the newly formed diverse and intensive seminar programme, this mission was most certainly met.

With topics ranging from Smart Cities; GIS and Big Data; UAVs (drones and the array of sensors they can now carry); Architecture, Engineering & Construction; Railways & Tunnelling (where data captured by drone can be positionally accurate to 5 mm and high resolution imagery can reveal detail as fine as serial numbers on trackside assets); Building Information Modelling; Earth Observation (data from satellites); Floods; Heritage; Environmental; to the all too prosaic Equipment Theft (a major problem for surveyors and engineers in urban areas). Particular key sessions focused around VR and AR – virtual reality and augmented reality, technologies which are increasingly used to visualise and understand projects or to assist construction management and personnel on applications such as buried utilities.

Many industry leaders, opinion formers and experts argue that we are in the middle of massive technological change and fuelling this fourth industrial revolution is geospatial data.  This was the focus of a provocative and thought-provoking conference programme overseen by Ordnance Survey’s Simon Navin.  The programme provided a platform for leading experts and opinion formers drawn from across industry and government.

William Priest, the aforementioned Government’s appointed head of the newly established Geospatial Commission, argues that their mission is about the “connectivity of people, places and things”. Priest is responsible to the Cabinet Office and will have a Treasury approved budget of £40 million a year to kick-start productivity gains across the economy.

The conference heard from the Government’s first appointed Head of Geography, David Wood. His mission is to provide a professional focus for the over 250 geographers working across the civil service and he will begin by appointing a series of Geography Ambassadors to raise awareness of the profession across government.

The Government’s recent release of a series of reports: Industrial Strategy; Transforming Infrastructure Performance; and Data for the Public Good (a visionary statement which includes the concept of the “digital twin”) was the focus of the final keynote of the conference by Mark Enzer, chief technology officer for engineers Mott MacDonald UK. He is to be the chair of the National Digital Task Group to drive forward these reports’ implementation.  Information is the “golden thread” explained Enzer. Technologies like BIM and GIS, are foundational to the economy. Critical is the “common data environment”, Smart Infrastructure and the prospect of the “Digital Twin”, a novel way that seeks to replicate in full detail physical assets. The approach offers a rich layering of data and is equal or potentially of more value to managers and planners than existing systems.

There were outside displays too. Several exhibitors took advantage of the venue’s external space to show off vehicle-mounted dynamic data capture systems equipped with laser scanners and video cameras. These systems are increasingly used in the UK and around the world to rapidly gather the data needed for 3D mapping, highway asset management, smart city navigation, planning and development.

It’s all about networking

GEO Business is renowned for its social events, where newcomers and older hands can get together to reminisce or quite simply, do business after hours. Pre-show drinks hosted by the industry’s professional bodies (TSA, RICS, ICES, AGI and ICE) brought exhibitors and conference delegates together, while the first day of the show ended with the extremely popular “Ale Trail” on the show floor where visitors sampled a selection of some of the best ales the UK has to offer.  There followed the annual GEO Business dinner, an evening of fine dining, this year held at Arsenal’s Emirates Stadium where even the FA cup made an appearance.

Commenting on the event’s success, Event Director Caroline Hobden said, “We are absolutely delighted with this year’s event. This is the fifth year of growth for GEO Business and the greatest yet in attracting more visitors from a diverse range of industries, professional disciplines and specialists. While there was plenty for the tech geeks and those wanting to know from the researchers and academics what the next disruptive technologies will be, the event showcased very solid opportunities for end users of practical geospatial technologies where they could see for themselves the current ‘state of the art’. For those active in this sector it has become an unmissable annual date on the calendar.”